A mind can't prove or step outside itself. It's like a line that goes
on being drawn to make a circle: it can't see its shape.

A lonely person that is every person

saunters across an abandoned square

bordering on every other square in the city.

Together they form a resplendent domain

in which the view from the windowsill

sinks into the trees surrounding.

Because birds shouldn’t be fed

someone throws out a whole loaf

onto the square hollow beneath my feet


an abandoned building that is flooding

with all empty buildings that I can think of

and those I shouldn’t think of. Who

with me? People are arguing

in several languages over pétanque.

off Arabic profanities and roll

into a ditch. People are watching

but I don’t know the rules. Turn away

to unfold the square even further.

Fragments and circles of what was whole

can be found on the Krugerplein.

of a tree trunk across metal rings

and letters: WELC around a bench a bike rack

OME a pole and sinks deeper and deeper STRAN

into the city GER. What is swelling here is an idea

a concentration of what and who are touching

such as meeting the eyes of a stranger

who is taking me along to the edges of the city.

at the center of the square. They jump

and scuffle. A kick when they’re down

a stomp when they’re down. Dance

together and can’t stop laughing

when they see me swaying along in the ring.

I hear a song from the mouth

of a person who fancies himself an

elven king. He stirs a pot with his staff

so the dark turns inside-out

and lays a knot in my stomach. He sings

so I can’t forget his voice he sings

so I hear his voice when I see the stick

that is poking the unnamed pointing

out of a window. The song connects the end

and where the bottom of the black pot

might be found is not mentioned in this history.

Where I approach the facade and where

the sticks touch one another inside and out

the unknown rejoices on the Zomerdijkstraat.

A girl with pompoms on her hat

like the ears of Mickey Mouse and tiger boots

is trying to catch the pigeons

on the neighbouring square. She hesitates

between catching and shooing

seeing that both lead to fluttering panic.

Where the square borders de Schaepmanstraat

two swings hang next to a dog.

Or could it be a sheep? A mother

with a stroller and a girl alongside her

who is struggling to keep up on her scooter

chases the birds off the roof of a car

in passing with a measured gesture. Why

are you chasing off the birds? asks the girl.

Because birds poop a lot and bird droppings

will make a sieve out of your car says the mother

while chasing off some imaginary birds around

her head. What’s a sieve? I can just make out

before they turn the corner. The birds pull

my gaze up to red lattices mounted in front

of a window. They let the air through

I’d like to say to the girl. They decide

to let inside be inside and outside

be outside. The refined regularity of the hatching

like in front of and behind known and unknown

or strange are distances. Scopes

and determinations that we impose

on ourselves. The lines do and don’t resonate

with the mortar joints of the bricks

heighten the awareness of surrounding patterns:

the stones the windows the houses the blocks

the streets the cities and structures

in which I believe myself to be moving freely.

I walk stiffly. I attempt

to walk a perfect circle through the city

I think not at all haphazardly. To see where

In thought I move to the edge

of the square that is starting to lose

its corners. On the Tweede Leeghwaterstraat

I am enclosed by high buildings

and stand in the grass like in a shallow lake.

a sandpit in the shape of a shell.

A hoodie just peeking out over the edge of

the jacket of a boy cycling past.

A hatch on a slope next to the train tracks

and the door of the train shooting past

at the height of the second floor sing

a fierce song together. It announces three yellow

dice that hang off the building’s facade.

A different word on each side:

lines that will not just let themselves be written.

My reading is one of many combinations

that the falling of the dice has made.

Why is BUBBEL in between CLOSE

and LONELY? Are WARM and HAND

English or Dutch words? I don’t want to

look for patterns or regularity in the dice.

But in the mobile nature in which they are

constant I read a lonely person that is every

person and the olive branch between them. 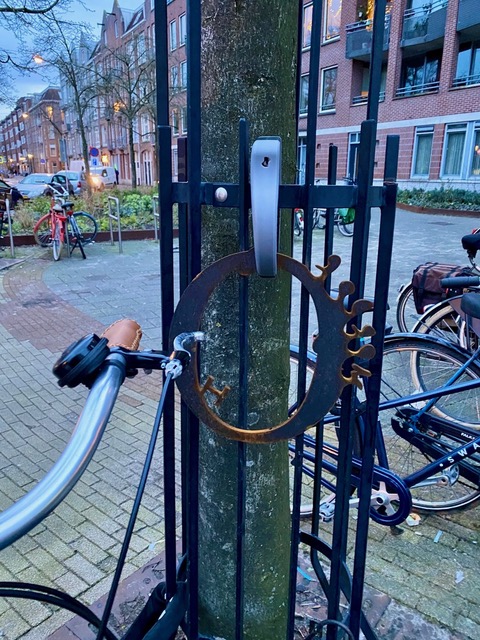